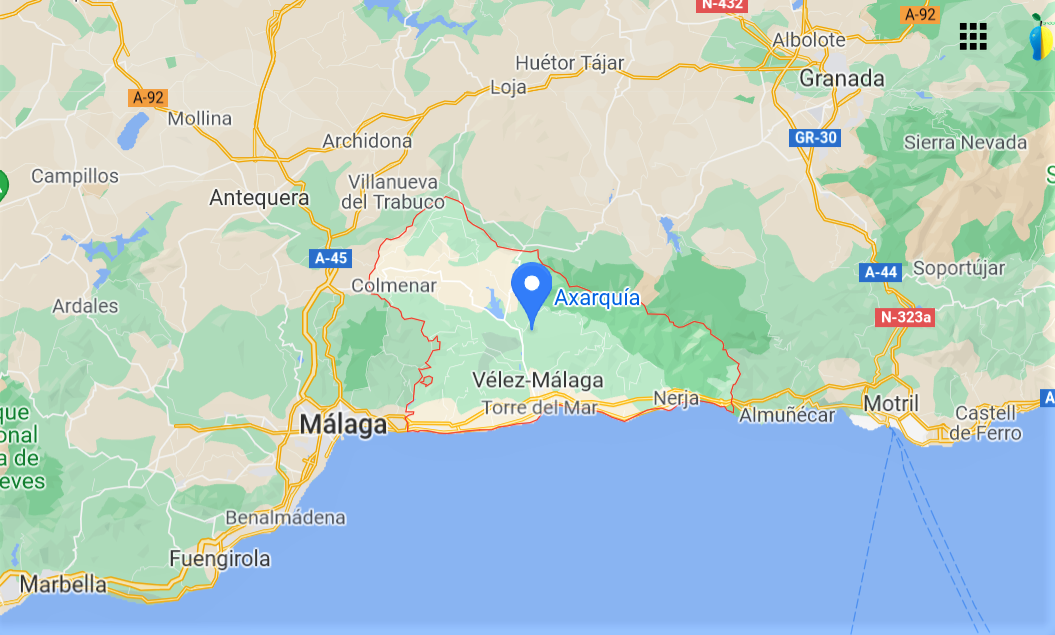 Discover and visit Axarquia through its wonderful villages (Frigiliana, Nerja,….)

In this article you will find the essential information for your visit to Axarquia:

A few words about Axarquia

La Axarquia is a comarca (region) in the province of Malaga. To situate it, it is the 45 km of coastline between Malaga and Nerja. It is the eastern part of the Costa del Sol.

Its name comes from the Middle Ages, from the Al-Andalus period: Ash-sharquía (الشرقية) which means “the eastern” (east of Malaga).

The best known municipalities are Nerja, Frigiliana, Torrox, Velez-Malaga and Rincon de la Victoria. However, this region offers many other treasures.

It is a concentrate of Andalusia, right next to Malaga.

Through the routes presented below, you will discover the incredible diversity of landscapes in a region of this size.

It is a region of only 1025km². That is, it is only twice the size of the island of Ibiza or the isle of Man.

Axarquia on the map

The micro-climate of Axarquia

Axarquia enjoys a subtropical climate and therefore pleasant temperatures all year round. In fact, the emblematic animal of Axarquia is the chameleon, which can be seen on the road as well as on hikes. It can be seen on the coast, in olive groves or in the mountains, such as in the Sierra de Almijara, Tejeda and Alhama.

Discover the villages of Axarquía through 5 routes

Here are the routes in Axarquia that will reveal its beauty and richness as you travel through its 31 municipalities.

The Axarquia has an incredible heritage through its history, traditions, cultures and white villages.

Each of these routes is an invitation to travel, with a different theme.

The route of the white Almohad villages

It is a journey back in time through authentic white villages.

In each of them you will discover an ancient alminar (minaret) which today serves as a bell tower. It is a dive into the Al-Andalus period and in particular the Almohad period (XIII and XIV century). You will find typical elements with the use of red brick, glazed ceramics and plaster as exterior cladding and ornamentation. The street pattern of these white villages is typical of this period.

All the villages are located at the foot of the Sierra de Tejeda, Almijara and Alhama.

Here are some pictures of what you will see on this route:

You can click on each village name to find out more.

Visit Archez and its famous Alminar

Visit Arenas and the hamlet of Daimalos

In Daimalos (which is in the municipality of Arenas) you can see one of the oldest minarets in Spain. It dates from the Merini period (12th century). It therefore predates the Almohad period.

As mentioned at the beginning : book a guided tour with a local guide of the Almohad and the white villages Tour, to discover the best of this route.

On this route, which is about 40km long, you will notice that the term “Mudéjar” is often used.
Mudéjar is a word that also comes from the Arabic language: “mudayya” which identified all the Spanish-Muslims after the reconquest. The Mudéjars could, after having made allegiance to the kingdom of Castile, keep their religion, their language and their legal organisation. They worked mainly as peasants and craftsmen in the masonry and textile industries. In the villages their neighbourhoods were called morerias or aljamas.

Another term would be used later when conversion to Catholicism became compulsory. The Mudejars had the choice of fleeing the country or becoming Moriscos (Mudejars converted to Catholicism).

This route is an exceptional way to discover a unique vineyard culture on the mountainside. It also allows you to discover the production of raisin, which are said to be the best in the world.

On the “Ruta de la Pasa”, you will discover this incredible way of making raisin. The process is unique and totally natural! It is one of the most ancestral methods in Europe and has been recognised by the UN in 2018 as a GIAHS (Globally Important Agricultural Heritage System).

This route is about 60km long and passes through 6 villages in Axarquia. The best period is from the end of August, at the beginning of the harvest, until October.

During this period there are ferias and festivals in these villages that are not to be missed. They often celebrate either the wine, the vine or the winemakers.

In addition, these villages are worth a visit, starting with the beautiful village of Comares, known as the balcony of Axarquia. This village is perched high on a mountain.

The village of Almachar

Almachar is home to the Raisin Museum. Here you can see all the tools used in the fields in the last century.

In September, a famous festival takes place in the village: The Fiesta del Ajoblanco. Ajoblanco is a speciality, a cold drink made from almonds and garlic!

Every year, in September, a typical festival takes place in the village: El Dia de la Pasa. Not to be missed!

This route is an opportunity to taste (in moderation) moscatel wines, mistela (very sweet wines made from sultanas!). Don’t forget to taste and bring back a packet of these famous raisins.

As mentioned at the beginning : book a guided tour with a local guide of the Ruta de la Pasa Tour (The Raisin Route) to discover the best of this route.

The Avocado and Sun Route

This route is mainly located in the valley of the river Velez. It allows you to discover the richness and agricultural diversity of Axarquia.

The road is about 75 kilometres long and passes through 6 municipalities.

The road starts in Rincon de la Victoria (just outside Malaga) and takes you into the valley and the surrounding mountains to discover these crops.

Why is it called the avocado and sun route?

The sun is very present on the Costa del Sol. On average, there are 300 days of sunshine per year. In addition, there is a subtropical microclimate in Axarquia. This climate allows the cultivation of tropical fruits such as the avocado.

However, it should be noted that the cultivation of tropical fruits on this route has greatly diversified. Today, we can walk along fields of avocados as well as mangoes, litchi, chirimoya (annona). At least 30 tropical fruits can be found in the Velez Malaga valley.

This route will take you through the municipalities of :

Visit Velez Malaga (and its 3000 years of history!)

It is the capital of Axarquia and is considered today as the European capital of tropical fruits.

Between Benamargosa and Velez-Malaga, if you have some time, you should visit the area around the village of Triana.

It is probably around this village that you will find the greatest diversity of tropical fruits.

This route also passes through the small white villages of Iznate and Benamocarra.

As mentioned at the beginning : book a guided tour with a local guide of the Tropicals Route to discover the best of this route.

This is one of the most beautiful rural tourism routes. The best period is from December to March during the olive harvest. The main variety of olives that is grown is the Verdial de Velez.

This village is the highest in Axarquia, at 900 metres above sea level.

This village, like its neighbour Alfarnate, is known as the Pyrenees of the Costa del Sol.

Do not miss the Feria del Aceite (Oil Festival) in April.

In this village you will discover stunning landscapes and the ruins of one of the oldest castles in the world.

It is the only village on the plain, with a lake that is the water reserve of the region. From the Vinuela you can enjoy many beautiful views of the Maroma (Pico de Tejeda). This 2068 metre high mountain is the highest in the whole province of Malaga.

As mentioned at the beginning : book a guided tour with a local guide of The Olive Oil and Mountain Route to discover the best of this route.

The Sun and Wine Route

Do not miss the narrowest street in Axarquia and its famous “round” cemetery.

This village, known as the cornice of La Axarquía, produces without doubt one of the best wines in Axarquía. The Jarel, a sweet white wine to be drunk chilled, made from the Muscatel grape variety, is a must.

If you are visiting this route in August, you should not miss the “Noche del Vino” (The Wine Night) festival.

The pueblo of Torrox

This village has the reputation of having the best climate in Europe. The walk through the authentic streets of the pueblo is a treat for lovers!

This is Calahonda beach in the centre of Nerja:

This village is recognised as one of the most beautiful in Andalusia and Spain.

If you are visiting in August, don’t miss the famous Festival of the 3 Cultures in Frigiliana . In this village you can also discover “El Ingenio”. It is the only place in continental Europe where sugar cane honey is still made!

As mentioned at the beginning : book a guided tour with a local guide of The Sun and Wine Route to discover the best of this route.

What to do in and from Axarquia?

For your holiday in Andalucia, Axarquia offers many activities for everyone

Axarquia is well known for hiking. However, in the surroundings it is possible to find very nice activities:

Axarquia as a starting point for excursions in Andalucia

It is also an ideal holiday destination, as it also makes it easy to visit the rest of Andalusia.

Visit Granada at only 1 hour away.

Visit Cordoba – and Almeria – at 2 hours away.

Cadiz is less than 3 hours away.