Nerja offers some of the most beautiful beaches and coves in Malaga, the Costa del Sol, and Andalusia

Nerja best beaches are among the most famous in southern Spain. A famous magazine has compiled a list of the 18 most beautiful beaches in Andalusia. Amongst these, 3 are in Nerja, in Axarquia – Costa del Sol.

These beaches were chosen from the 850 km long Andalusian coastline. There are 500 km of coastline in the Mediterranean and about 350 km on the Atlantic coast.

To read the article on the 18 most beautiful beaches in Andalusia, click on the following link: National Geographic.(Spanish version)

At the bottom of the page, you will find a selection of activities to do (diving, snorkeling, kayaking, boat rental).

Nerja, Axarquia and the Alboran Sea

A bit of geography and history to situate the area:

Nerja is in Axarquia Costa del Sol and its name comes from the period of Al-Andalus. At that time it was called Narixa.

Axarquia, comes from the Arabic word Ash-sharquía (الشرقية) and means “to the East” , “towards the East”. It refers to the 45km of coastline to the east of Malaga, as far as Nerja.

The Alboran Sea is the sea that borders this coastline (it is the western part of the Mediterranean Sea).

This sea takes its name from a small island of 0.07km²…, 50km from the Moroccan coast and 80km from Almeria, called Alboran. It has been a Spanish island since 1540, taking its name from the Arabic (al-burān, البران), which means the “navel of the sea”.

A geological fact: it is the only emerged part of a 150km long underwater mountain range. It is the point of collision between the African and Eurasian plates. It is an important seismic zone, and in 1899, magma rose to the surface of the water. An igneous rock appeared right next to the island of Alboran. A name was given to it…Alboranite.

Finally, a geopolitical anecdote, 21 Spanish soldiers have been living permanently on this island since 1960 when Soviet fishermen tried to set up a base there!

There are 12 of the 9 km of beaches in Nerja. They are presented in small videos or pics. By clicking on the pics you can enlarge them to the size of your screen. The whole seaside in Nerja is exceptional and deserves to be seen.

A beach of incredible beauty with crystal clear waters. It is located between cliffs in the Natural Park of Maro – Cerro Gordo”. It is one of the best beaches in Nerja.

It is located next to Canuelo beach. This beach is wild. Remember to take something to eat and drink if you want to stay for a while. It is an ideal beach with turquoise waters to observe the sea bed. You can see fish from the water’s edge!

Another beautiful and wild beach. If you want to stay for a while, you’ll have to bring your own food and drink. This beach, like the previous ones, is ideal for relaxing and swimming.

The name of this beach comes from an old mill that used to make paper. You will surely pass it on your way to this beach. Another feature that makes it a rare wonder: there is a natural freshwater pool that overflows directly into the sea! (first pic)

The beach of Maro is beautiful. In summer you have to walk down to it, but the walk is beautiful. Behind this beach, towards the west, is the famous Maro waterfall (only accessible by sea). To the right of the beach, there is a small cove nearby. It is called Cala Chica or Caletilla. 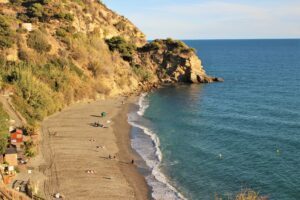 It is probably the most famous beach in Nerja with the famous paella restaurant, Ayo. It was made famous by the Spanish TV series “Verano Azul”.

This beach is located, like the next one, in the centre of Nerja. It is a small and picturesque beach. There is the Carabeillo Chico beach next door, which is even smaller! The photo was taken at the end of the day.

It is in fact 3 very small coves hidden between the rocks, just next to Calahonda beach. They are accessible from the latter 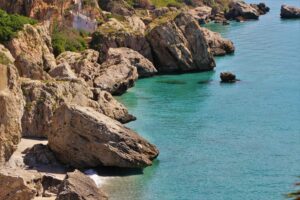 It is located just to the left of the Balcony of Europe. It is therefore in the centre of Nerja. The view of this beautiful beach is spectacular. In summer, you have to get up early to get a seat! 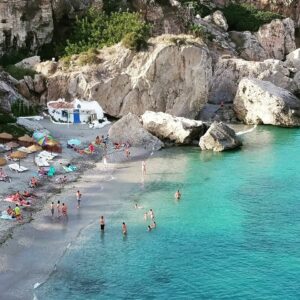 This is the small beach just to the right of the Balcony of Europe. 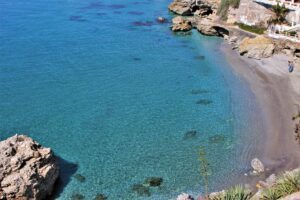 This beach has a long history.
In the past, fishermen used to live on this beach all year round in houses carved out of the rock.
There is also a legend that the name of the beach comes from the Hebrew word “shalom”. From this beach, all the Jews in the area who refused to convert to Catholicism a few years after the Reconquest left and were expelled. This word shalom (which means “goodbye” in this case) was then pronounced by the Jews as they boarded a boat to take them across the Mediterranean. This is the beach at the top of the photo. 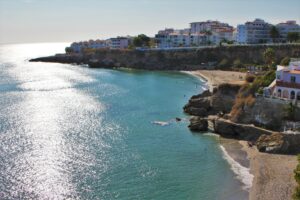 One of the largest beaches in Nerja between El Playazo beach and El Salón beach.

This is the largest beach in Nerja, at 1,7km. It is located to the west of the town, up to Torrox. 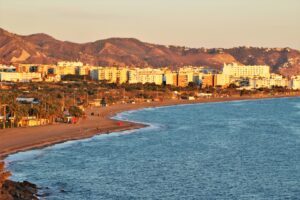 Nerja : a heavenly place for water activities and water sports

Many activities can start from one of Nerja best beaches.

To see the Maro waterfall by : Sea kayaking

To discover in Nerja and Torrox spots of: snorkeling

Rent a boat in Nerja and La Herradura.

Below you will find a selection of boats for rent in Nerja and nearby La Herradura:

– boat rental without a licence,

– boat rental with compulsory licence (the last link below):

NB: if you are a family or a small group, some of the boats for rent can accommodate up to 10 people.

Where to sleep in Nerja?

Booking.com
Benamargosa best things to see and do