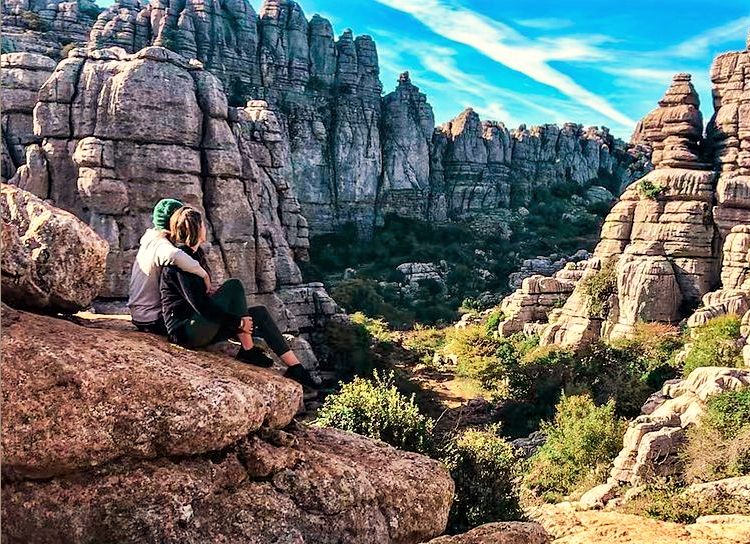 El Torcal and the dolmens of Antequera have become must-sees

Many travellers nowadays stop off in Antequera to discover El Torcal and the dolmens.

There are several reasons for this, apart from the exceptional beauty of these sites in the province of Malaga:

Antequera is the geographical centre of Andalusia, and offers many world-renowned sites to visit:

El Torcal is a site of rare beauty and an absolute wonder of nature. It is often said that these 20km² are the most beautiful karst landscape in Europe.

It is difficult to imagine when we are there that El Torcal was under the sea 150 million years ago, and that today we are between 1000 and 1200 meters above sea level!

What happened: 150 million years ago the Thetis Sea covered this whole area. This sea extended from Cadiz to Alicante. Then, as two tectonic plates collided, this site emerged from the water over time, moving up the layers of sediment accumulated at the bottom of the sea.

Then, time and meteorological factors such as water, ice and wind have shaped this spectacular landscape by sculpting the limestone.

This is why today you can walk at an altitude of 1200 metres and see many marine fossils (ammonites and belemnites).

The landscape has been sculpted by the natural elements.

Given the wide range of shapes that the rocks have taken, many of them now have nicknames:

The flora is very varied, with up to 33 different species of orchids!

The fauna is also well represented with the Iberian ibex, the fox and the badger.

And the birds of prey are also represented with the golden eagle, the eagle owl or the Griffon vulture (above, April 2022)

To finish with El Torcal: Antequera is one of the few towns in Andalusia where the inhabitants are supplied with water directly from the mountains and not from a dam or reservoir.

The Peña de los Enamorados has become the iconic image of the town of Antequera.

It is also known as the “Indian head”.

The Peña de los Enamorados means the sorrow of lovers. The name comes from a legend that tells the story of an impossible love between a young Christian man, Tello, and a young Muslim woman, Tagzona. He was a soldier of Ferdinand the Catholic and she was the daughter of the Moorish chief of Archidona. Apart from the war, their marriage was therefore impossible. Legend has it that they preferred to climb and throw themselves off this mountain.

The dolmens of Antequera

These dolmens were built during the Neolithic period. These three tombs, buried under their original burial mounds, constitute one of the most remarkable architectural works in European prehistory.

The colossal size of the stones placed above the burial chambers testifies to an incredible architectural ingenuity.

These megalithic structures have the appearance of a natural landscape, they are buried under earthen mounds.

The museum next to the first two dolmens provides a perfect understanding of the construction of the dolmens.

The dolmen of Menga

It is believed to have been built in the Late Neolithic period, around 6000 BC. It is the most spectacular to see. In addition, it faces another natural monument: the Peña de los Enamorados

The 32 megalithic stones that make up the dolmen are placed around a main burial chamber. In the 19th century, hundreds of skeletons were discovered in this burial chamber. It is the largest dolmen with a length of 25 metres.

The largest megalithic stone, which covers the burial chamber, weighs 150 tons (the equivalent of over 100 cars!). There is also a 20-metre deep pit which was probably once a well.

During the summer equinox the sun’s rays penetrate the dolmen to the burial chamber.

The dolmen of Viera

It is located about 100 metres from the Menga dolmen. It is also known as the “cueva chica”. It was discovered in 1903 by a person whose surname was Viera. This dolmen is oriented to the east.

This 4,000-year-old building consists of a long, narrow corridor that leads to a rectangular burial chamber.

During the equinoxes, the sun’s rays penetrate inside to the burial chamber.

The dolmen of Tholos, El Romeral

It is about 4 km from the two previous ones. It is thought to have been built in the “late” Neolithic period, around 2500 BC.

It is interesting to visit because its structure is quite different, with a false dome roof.

There are guides to these incredible sites:

To book a visit with Cipriano: El Torcal and the dolmens of Antequera from Nerja, Torrox, Torre del Mar

To book a visit with Justine: El Torcal and the dolmens from Antequera

Where to stay in Antequera

After visiting these places, you can take the opportunity to visit Antequera, a beautiful city full of treasures!

For nature lovers in Antequera

Don’t hesitate to drive 20-25km to the fabulous Fuente de Piedra lagoon, to observe a multitude of birds, including pink flamingos!

Finally, to find other ideas of wonderful places in Andalusia, you can consult the pages of the blog on Andalusia.