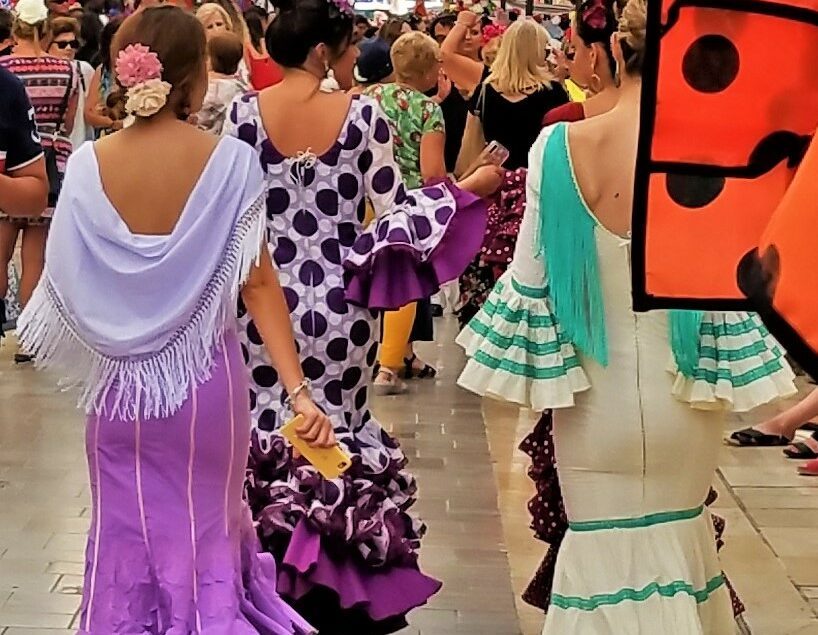 Origins of this fair

The Malaga Feria 2022 has its origins in a historical date. It celebrates the reconquest of the city by the Catholic kings (Isabel of Castile and Fernando II of Aragon) on 18 August 1487.

Below is the poster of the 2022 Malaga Feria entitled “Mar de Feria”:

Origins of this festival are ancestral: it was declared a “popular festival” on 15 August 1491 (the day on which Catholics celebrated the Assumption of Mary). Then in 1887, the 18th of August, the anniversary of the Reconquest, was designated as the main day of the Feria.

This Feria is the biggest fair in Andalusia, together with the Feria de Sevilla.

However, it is unique in that it takes place in two different locations in Malaga:

It attracts up to 1 million visitors in 8 days. It is very popular, exuberant and cosmopolitan. For example, entry to the casetas (areas of the night feria where people eat, drink and dance) is open to all and free, which is not the case in Seville. Malaga is also generally appreciated for its hospitality and openness to all.

The Official start : The Pregon Night on the night of 12 to 13 August at midnight :

During the Feria de Málaga, there are 3 magical moments:

The Malaga Feria by day, to find your way around, the main places to see (on the map below)

Typical things to do, to know :

In the town centre many malaguenas will be wearing gypsy attire, usually a polka dot dress, with a flower in their hair and a manila shawl. Often, from 6pm onwards, young people arrive in large numbers to do “botellón” (which can be translated as “open-air aperitif”), before going on to the night fair.

Traditionally, women are given a biznaga. The biznaga is a flower made by the biznageros from jasmine flowers. Most often this flower is “pricked” and presented in a penca leaf (cactus).

For those who would like a quiet moment during the daytime feria, I invite you to discover the street art area of Malaga. It is located just behind the house where Picasso was born.

For 8 days, the Real del Cortijo de Torres is transformed into a real fairground all night long (it is open during the day too!)

Here is the map of the casetas of the Feria by night:

The Feria by night is reached by bus from the city centre. For those who want it, it’s 8 days of non-stop feria!

For a break between two days, you can relax at the magnificent Al Ándalus Hammam in Malaga.

Some useful links for those staying a few days in Malaga

Around Málaga, I invite you to discover the Axarquía region through its beaches and authentic villages. You will also find in this link many activities (aquatic, hiking, outdoor) around Malaga.

If you need a car rental, here is a very good car rental agency in Malaga airport.

The month of August is also the occasion to participate in many genuine ferias and fiestas in Axarquia, just east of Malaga. In fact, just after the Feria de Málaga, the magnificent Festival of the 3 Cultures begins in Frigiliana.

Finally, in this link, you will find: all the accommodation offer in Malaga.

Here are some ideas for activities to do during your stay in Malaga and its surroundings: