Visit the Albaicin (or Albayzin) district in Granada,

This overview of the Albaicin district of Granada is based on the following topics:

The origins of the Albaicin district of Granada

First of all, this district deserves to be in your visit to Granada.

The Albaicin district of Granada has kept its authenticity with its medina aspect that takes us back to Al-Andalus. In fact, as the name suggests, Albaicin (Albayzin) comes from the Arabic dialect (al-ba’isîn). 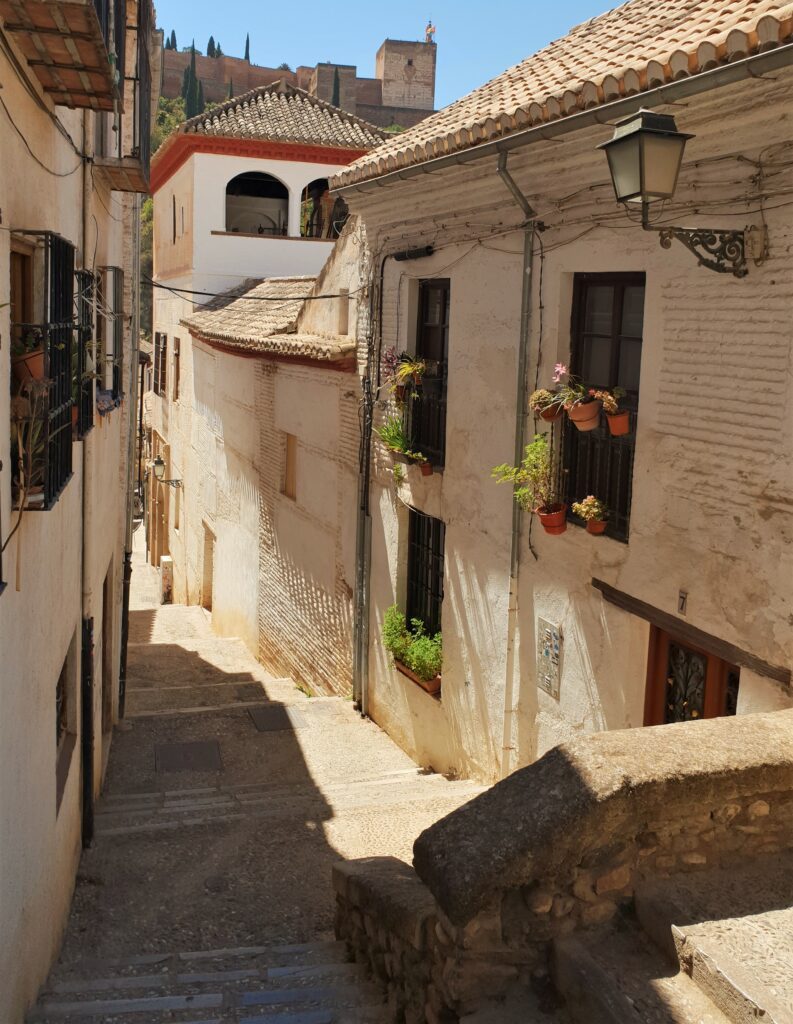 The origins of this neighbourhood are extremely old.

It was occupied by the Iberians, under the name of Ilturir, and later by the Romans. Caesar gave it the name Municipium Florentinum Iliberitanum. 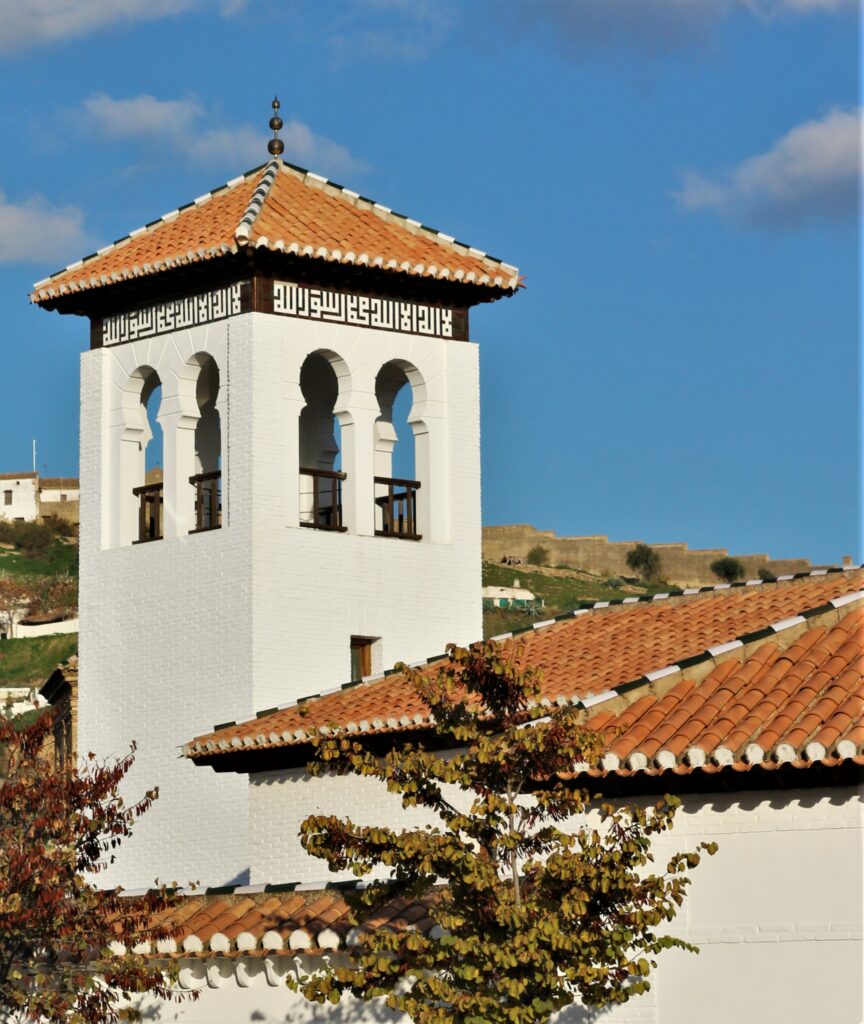 You can still see the old wall from that time. It was built to protect Madinat Garnata and the Alcazaba Cadima, the fortress of the Zirid kings. 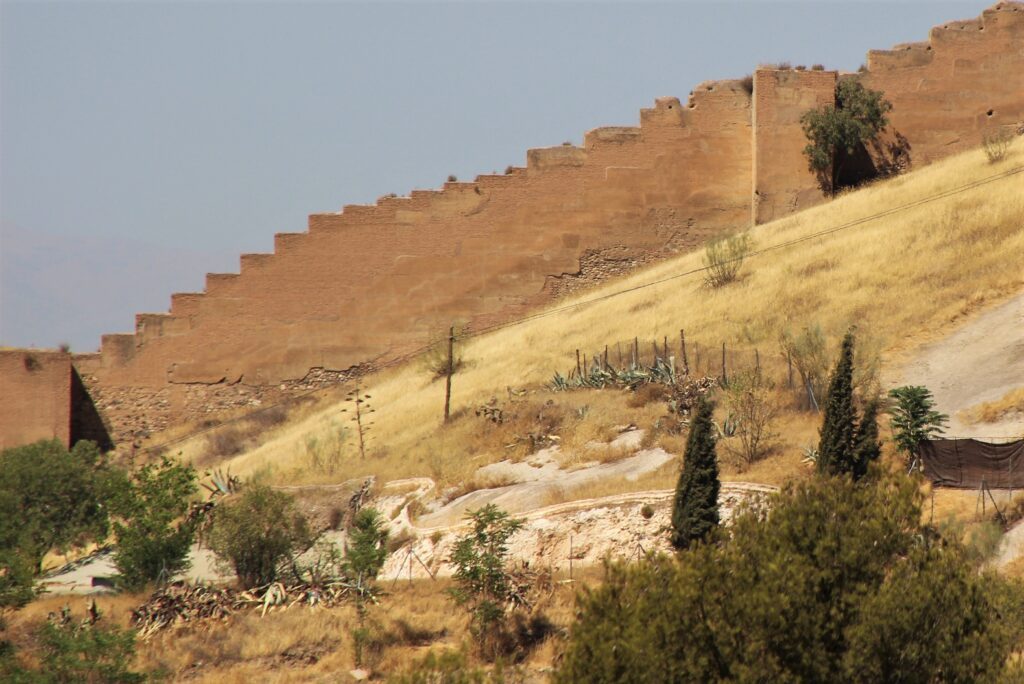 Next to the new Madinat Garnata, during this period of peace, another district that already existed grew. The Arabs gave it the name Garnata-al Yahud, the Granada of the Jews. 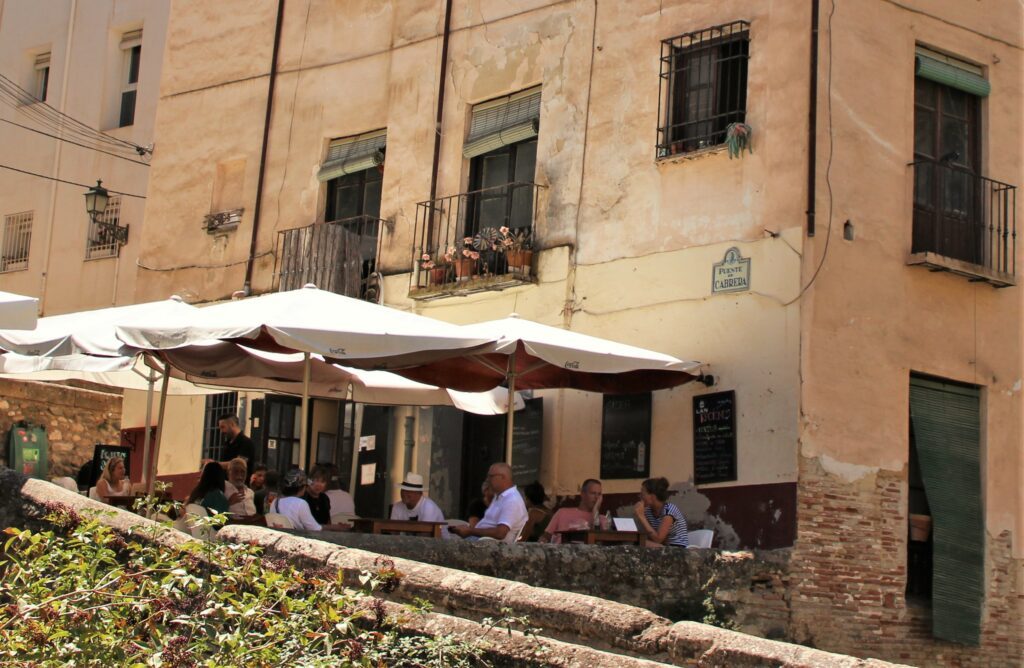 Today it is called Realejo and is located between the river Darro and the Alhambra. 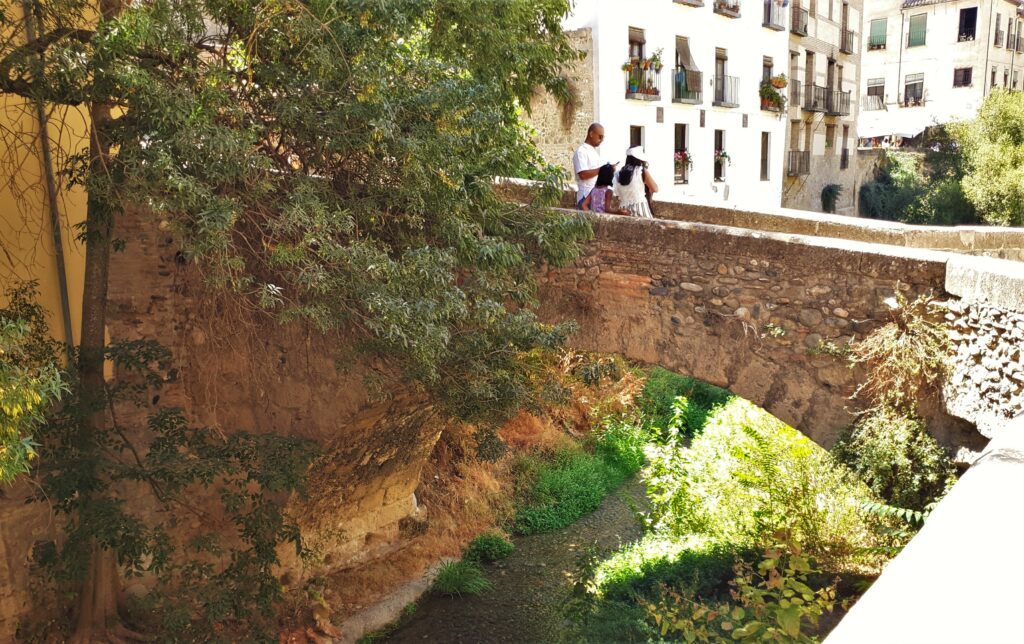 These two “Garnata” are the origin of today’s “Granada”.

A few more words of history about this neighborhood :

When the Catholic kings took over Cordoba in 1236, a large number of Muslims left Cordoba to settle in Granada. It was during this period that the population was at its highest, with up to 26 mosques in the district. 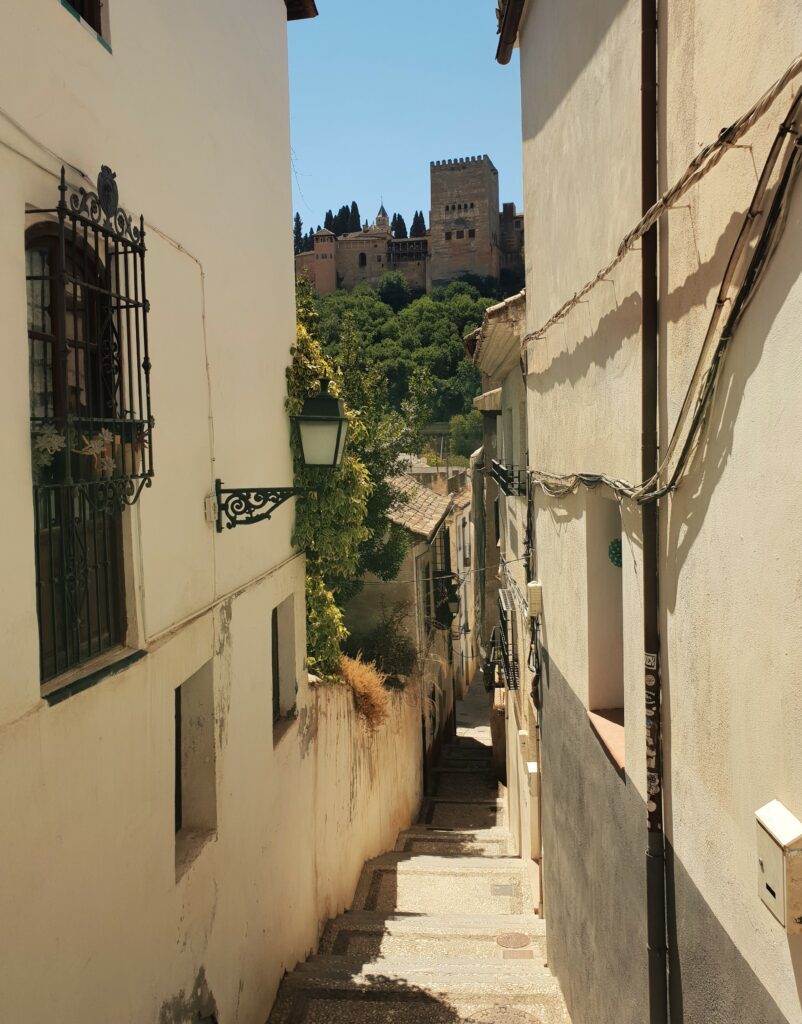 The Albaicin experienced a period of opulence with the appearance of palaces and villas with interior gardens, called “Carmenes”. 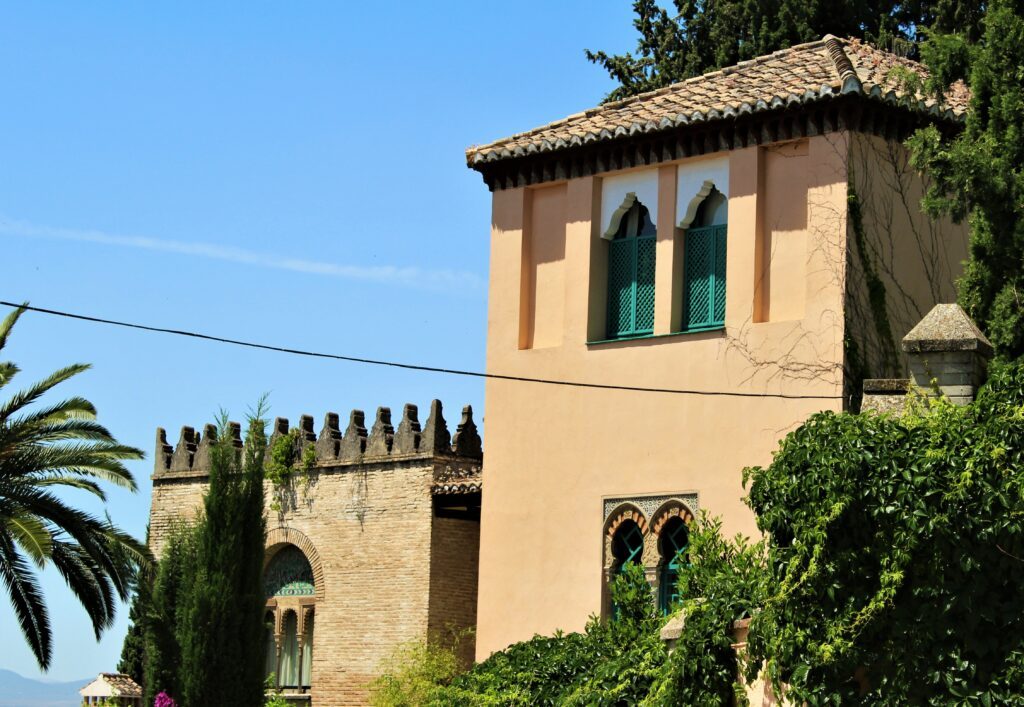 Albaicin Granada would take on this definitive name during the Nasrid kingdom (13th and 14th centuries). 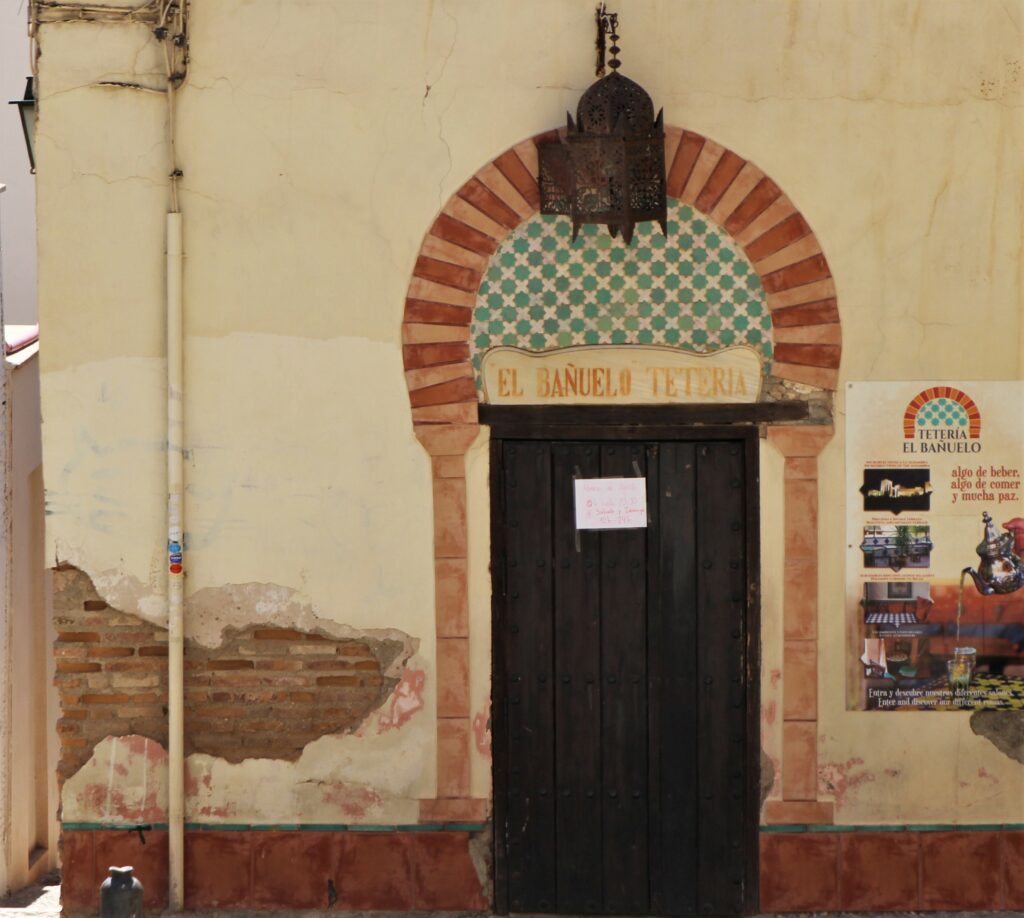 This neighbourhood was declared a World Heritage Site by UNESCO in 1994.

Where is the Albaicin district ?

The Albaicin, located on the Sabika hill, is one of the most important places to visit in Granada today. It is the origin of the city.

You will find it inside the red dotted lines on the map below:

What to see in the Albaicin district of Granada?

The church and Saint Nicholas square

The church is located in the centre of the district.

This church was built on a former mosque in the 16th century by order of the Catholic kings.

The church square is very famous because of the Mirador San Nicolas. It is probably the best place to admire the Alhambra and its palaces as a whole.

This square is also often very lively with groups of musicians playing flamenco.

This is one of the few houses from the 11th century. It takes the form of a small palace with a patio. Some rooms are open to the public. The architecture is in the Nasrid and Mudejar style. A must-see!

This palace dates from the 15th century and is hidden in a narrow street (callejon de las Minas) in the upper part of the Albaicin district.

It is of historical importance, as it was built for Aisha, the mother of Boabdil, the last king of the Al-Andalus period. Aisha occupied it when she was repudiated by her husband, King Muley Hasan.

This palace is called Dar Al-Horra, because Aisha herself was nicknamed Al-Horra: the free one.

The palace is open to visitors every day.

This building dates from the 16th century and houses the High Court of Justice of Andalusia. Its Renaissance style construction was ordered by Philip II.

Philip II was then ‘King of the Spains’. This period was the peak of Spanish power. It is said that Philip II ruled over an empire where the sun never set. He was king of several European countries at the time, and sovereign over territories ranging from the Philippines to South America.

It is a beautiful building full of history.

Its interior courtyard is attributed to Diego de Siloé. On the left of the courtyard there is a monumental staircase.

And, under this staircase we can see an old big stone with a ring. This is where the Cueva del Verdugo (Cave of the Executioner) is located. It is a place that was used as a prison and where the executioner was located.

In the courtyard where the prisoners could sometimes leave, we can still make out some of the words written by the prisoners on the columns.

The chancellery is located in the Plaza Nueva. From this square you can take the little red bus up to the Alhambra.

The Carmenes of the Albayzin

A Carmen is a typical house in the Albaicin and Realejo neighbourhoods.

These houses are real little palaces with gardens and Arab-Andalusian patios. They are referred to as the “Cármenes del barrio del Albaicín”.

The word “carmen” is of Arabic origin. It comes from the Arabic word “karm” which means vine or orchard.

It was customary for carmens to have a bower, made of vines or shrubs that provided shade and coolness. This feature of the “character” of the carmenes is attested to by the writings of Ibn Al Jatib in the 14th century.

In the neighbourhood you will probably also come across the house where the famous flamenco singer Enrique Morente was born.

The Arab Baths of Granada are the oldest and best preserved Arab baths in Andalusia.

During the time of al-Andalus, Granada had up to 21 Arab baths, hammams.

These Arab baths, dating from the 11th century, were originally called hammam al-Yawza. They are one of the few Moorish buildings that were “saved” after the reconquest by the Catholic kings. Luckily, houses were built on top of them very quickly. This prevented their destruction.

These Arab baths, El Bañuelo, are the oldest civil building in Granada!

Here is a link to book your ticket for this visit to El Banuelo in advance. It costs about 9 euros/person. But what is very interesting is that with this ticket you also get entry to the Casa Horno de Oro and the Dar Al-Horra Palace!

The gates of the medina walls

There are four remaining gates from the Al-Andalus period, some of which are over 1000 years old. They were used to protect the Albaicin:

When walking through the Albaicin, try to see one or two of them. Personally, I think they take you back in time.

The museum of perfumes

Here is a small museum discovered by chance, but it is worth a visit.

The entrance is free. It is as much a museum that explains how perfumes are made, as a shop where you can create your own perfume!

You can learn a lot here. And why not take home a souvenir of Granada, through a perfume that you have just created yourself!

NB: be careful, however, if you fly without checked luggage, not to take a bottle that is too big!

The church of Santa Ana

The church of Santa Ana is located in Plaza Nueva, almost opposite the Royal Chancellery.

Hospitals in the Islamic world were called maristan or bimaristan. This is one of the oldest hospitals in Europe.

Not much remains of its original appearance, except for the wall on the left of the hospital:

This hospital was built in 1365. Its original vocation was to treat the sick without distinction of pathology. It later specialised in mental illnesses. It was perhaps the first hospital in Europe to specialise in psychiatric care!

Next to the Albaicin district

Just next door, don’t miss another neighbourhood, known as the historic gypsy quarter of Granada: the Sacromonte district. You will discover many cave houses as well as the zambra!

Where to have a drink or a mint tea in the neighbourhood?

Here are two ideas: one to have a tea and another to have a drink with a tapita

At the bottom of the district, there are several teterias (tea rooms). In some teterias, you can even take a staircase down to beautifully decorated rooms in an oriental style.

For a drink with a tapita:

In Plaza Nueva, between the Royal Chancellery and the Perfume Museum, there is a bar that is quite original in its design.

Part of the floor of the bar is made of glass, which allows you to see the remains of the old Zirid wall, built more than 1000 years ago! And finally the service is very pleasant.

What to do in Granada?

Here is a great idea to relax in a beautiful place after the city tour (…and the heat): book the hammam. It is located not far from the Alhambra.

Below are many ideas for activities and guided tours, classified by theme. You can book them online today.

Bonus: all activities can be cancelled up to 24 hours before the scheduled date:

Find accommodation in the Albaicin

See the offers for a stay of one or more nights

This is an authentic place, built in the 15th century. The façade and the patio are magnificent!

It is the Casa Morisca hotel. In the following link you will find all the information and the possibility to book online: Hotel Casa Morisca

The map of the area with the mentioned places

If you need to rent a car to go to Granada or its surroundings, here is a link to :

Find a rental car from where you are staying.

In the event that you are on holiday on the “Costa del Sol Oriental”, the eastern part of Malaga.

From your place of stay between Nerja and Torre del Mar, a great guide will organise a day trip to discover in Granada the Alhambra palaces and the Albaicin quarter. This tour is done in semi-private groups (2 to 8 people maximum).

To access the details of the day, the price and to book online, just click on : Semi private tour to Alhambra and the Albayzin.

In the following link you will find other beautiful sites in Andalusia to discover, see the blog articles on Andalusia.

Here is the link to receive our newsletter from the blog andaluciamia.com

Here are some more photos of the Albaicin district in Granada: